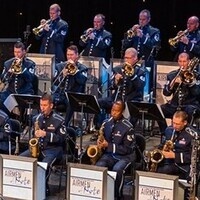 Join the Airmen of Note for the return of the 2019 Jazz Heritage Series featuring world-class jazz trombonist John Fedchock. This performance will feature big band classics and original jazz compositions.

John Fedchock is an American jazz trombonist, bandleader, and arranger. Fedchock studied at Ohio State University and the Eastman School of Music. He worked for several years in the Woody Herman Orchestra in the 1980s and was noted for his arrangements. He also worked with Gerry Mulligan, Louie Bellson, Bob Belden, Rosemary Clooney, and Susannah McCorkle. He recorded his first album as a leader in 1992 with the New York Big Band, which was active into the late 2000s.

Fedchock's illustrious career in jazz has spanned over three decades. Since his emergence on the scene in 1980, Fedchock has established himself as a world-class trombone soloist, a heralded bandleader, and a Grammy-nominated arranger. An in-demand performer and writer in New York City, his multifaceted talents have led him to become one of NYC’s premier jazz artists. His critically acclaimed John Fedchock New York Big Band has become a marquee group, showcasing Fedchock’s trombone and arranging as well as the band’s all-star soloists. The JFNYBB’s five CDs on the MAMA and Reservoir Music labels have all received high praise from critics and extraordinary success on national jazz radio charts. The early success of the band resulted in Fedchock’s name appearing in DOWNBEAT’s Readers Poll under the categories of Trombone, Arranger and Big Band, simultaneously for several consecutive years. In recognition of his formidable arranging skills, Fedchock is a two-time GRAMMY Award nominee for “Best Instrumental Arrangement”. The JFNYBB’s recordings have appeared in jazz radio’s Top Ten, and the New York Times has applauded the band’s “Cheerful Syncopation, Served With Spit-and-Polish Precision.” Small group projects with his quartet and NY Sextet showcase A-list sidemen along with Fedchock’s “incomparable trombone playing, which seems to have no limit, technically or musically” (JazzReview.com).

You're not going yet!