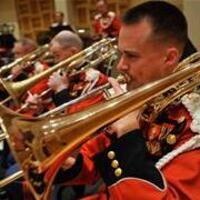 CANCELED Marine Band Concert: "My Hands Are A City"

EVENT CANCELED DUE TO INCLEMENT WEATHER

Our modern urban environments have served as inspiration for all kinds of musicians. Jonathan Newman’s Symphony No. 1, My Hands Are a City is a musical depiction of the nation, specifically New York, through the lens of mid-twentieth century “beat” artists like Jack Kerouac, Allen Ginsburg, Charlie Parker, and Robert Frank. Newman’s music takes us “On the Road” and introduces us to “The Americans” before returning to the “Rivers of the Bowery.” The historic city of Vienna inspired Franz von Suppe’s Overture, depictings scenes throughout the day in this musical gem. British composer Adam Gorb’s Adrenaline City Overture is inspired by twenty-first century life in London, both stressful and vibrant, while Aaron Copland’s Quiet City displays the moments of solitude and quiet that inhabitants are capable of stealing away during a late night in the city.

Top
This event content is powered by the Localist Community Event Platform.